Planning blunders are emerging in the Gardens of Stone reserve. They arise from the replacement of open and transparent park management processes with planning by media release announcements and backroom deals hammered together in the lead up to the NSW election in March.

Take action - write to the Minister for the Environment

There are better tourism solutions for the reserve and the community, ones that don’t grant monopolies to the big operators. These outcomes place reserve management for nature conservation first, and was outlined by conservation groups in Destination Pagoda, a plan designed to benefit Lithgow as the gateway to the reserve. The NSW Government thought this plan was really constructive, and it led to the area being reserved but then, apparently, the big end of town got a hold of it.

If the NSW Government has its way, the spectacular natural heritage of Gardens of Stone State Conservation Area will soon be an amusement park with four accommodation resorts. What the Government should be doing is establishing effective environmental management, including of the coal industry that has plans to wreck more nationally endangered swamps in the reserve in breach of the offset deal struck with the Federal Government over reserve management (but that's another story).

The "Christmas special" public consultation for two commerical leases in the reserve was advertised in the Herald on 21 December (see notice below and conservation group submissions at page bottom). The parent company behind both proposals, is the same company that plans to develop high-end accommodation in the Tasmanian Wilderness World Heritage Area. So it seems the “Wollemi Great Walk” that appeared to be a thought bubble in the ineffectual Gardens of Stone Master Plan is another thing to worry about.

The lease consultation was a sham, with no specific details available on the proposed four accommodation resorts and the Lost City adventure theme park near Lithgow. The leasing process is a developer’s dream. Experience Co gets exclusive possession of five development sites before its proposals are determined, pre-empting the planning process. And If or when the developments are approved, then the NSW Government's multi-million dollar infrastructure subsidies begin to flow.

The impacts on the natural and cultural heritage of the reserve of the four proposed resorts will be large, as intact, remote, and scenic parts of the Gardens of Stone State Conservation Area are flagged for resort development. These four proposed resorts seek to create a monopoly that siphons off the highest paying tourists who might have otherwise spent their money in the local community.

The other proposal, is for the Lost City Adventure Precinct. It includes ziplines, toilets, carparks, elevated walkways/suspension bridges, via ferrata climbs and possibly a food outlet that will cause visual blight over Lithgow’s most scenic pagoda landscape. As a result, it denies the local community a chance to establish a scenic lookout as good as Echo Point, Katoomba. The Lost City location also may put children at risk as Marrangaroo Military Base that uses live ammunition and ordinance is only 400 metres away.

The Lost City theme park location will ensure most visitors go to the adventure park not Lithgow as they enter the reserve from Clarence via the Old Bells Line of Road, so again the local community will gain little benefit from the proposed development.

The Blue Mountains Conservation Society and Wilderness Australia have called for the Minister for the Environment to convene a public hearing on both proposed leases (links to these submissions are below). A public hearing can remedy the serious defects in this secret lease issuing process. A public hearing process should give the public access to details on what is proposed at the accommodation resort sites and adventure park, any impacts to heritage values caused by the proposals under the leases and facilitate informed contributions to inform the process. What a hearing can’t to is fix the plan of management or its tourism strategy, that will require political will from the next NSW Government after March 25. 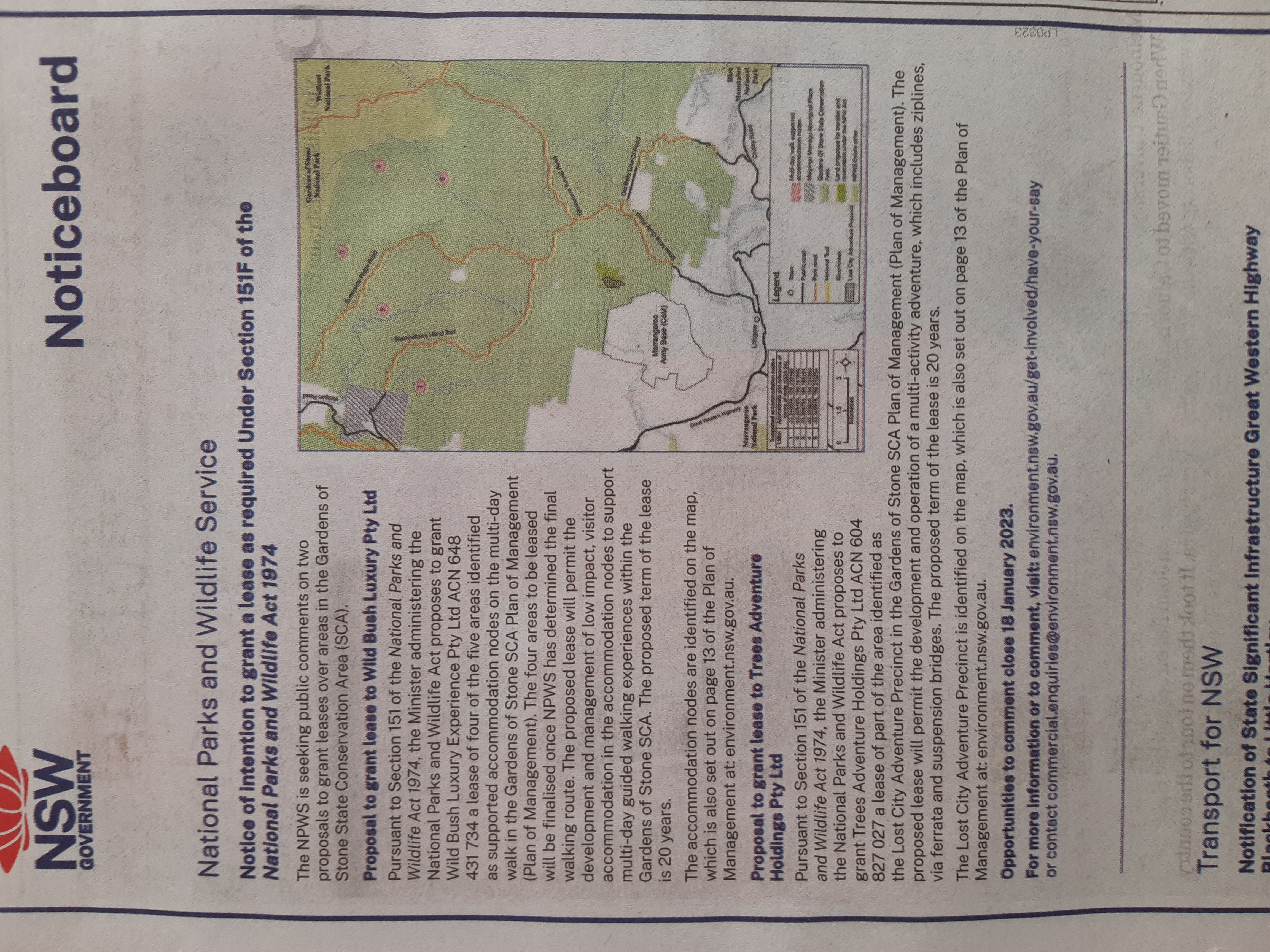 As you can see, there was no substantial information to comment on in public exhibition for the leases